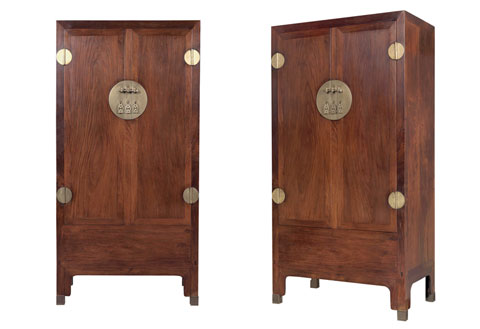 At the upcoming 2015 Spring Auctions, China Guardian is once again presenting two sets of Ming furniture, this time a set of six rose chairs and a pair of square corner cabinets both datable to the late Ming, from the Belgian collector Mr. Philippe De Backer’s Lu Ming Shi Collection. Memories are still vivid of China Guardian’s auction "Lingering Admiration of Classic Beauty" in which all 70 pieces of Ming furniture on offer from the same collection were sold, realizing a total of RMB 248 million, in the spring of 2011. This was followed by the sale of a huanghuali folding chair, also from the same collection, for over RMB 23 million after fierce bidding in autumn, 2014.

De Backer’s collection was entirely acquired from the Grace Wu Bruce Collection, the namesake of which has been admired by collectors, scholars and museum experts around the world for her expertise and aesthetic acumen. Collectors buying from her are, without exceptions, pleased and have ease of mind. Since 1990, De Backer has paid her many visits and the dealer has curated exhibitions of the collector’s Ming furniture at Beijing’s Palace Museum, Nanjing Museum and Guimet Museum of Asian Art in Paris, publishing an exhibition catalogue that highlights the untainted beauty of Ming furniture in various aspects. The dealer even introduced the collector to the Ming furniture expert Wang Shixiang, who named the latter’s collection Lu Ming Shi.

Sleek in contours and elegant in form, the set of six late Ming rose chairs from the Lu Ming Shi Collection represent Ming furniture at its finest. Generally called “writing chairs” in the Jiangsu-Zhejiang area, rose chairs feature in literary gatherings such as the one depicted in the Song painting Eighteen Scholars (Plate 1). In his book Mingshi Jiaju Yanjiu (A Study of Ming-style Furniture), Wang Shixiang points out that rose chairs owe their form directly from those of the Song dynasty. Judging from the number of surviving pieces, the chairs were highly popular in the Ming dynasty (Plate 2). In Ming and Qing illustrations, they can be seen flanking a table, side by side in pairs, or simply at an angle with one another, and arrangement is multifarious. Their design, with the openings, goes well with modern décor and would fit nicely by a bay window even in today’s interiors.

The set of six rose chairs from the Lu Ming Shi Collection measure 59.3 cm in width, 45.5 cm in depth 88.5 cm in height. The back of the chairs is decorated with an opening framed with arched aprons that are carved with scrolling grass. Balustrades supported with short struts are fit along the seat frame. In the collection of Lucy Chao, or Chen Mengjia’s wife, there is a comparable Ming example (Plate 3) of similar size, with the seat measuring 56×43.2 cm and an overall height of 85.5 cm, and likewise featuring a framed opening for the back, arched aprons below the seat and undecorated stretchers. The form, as pointed out by Wang Shixiang, is typical of rose chairs.

Few sets of Ming chairs have survived. Isolated known examples have been found in California’s former Museum of Classical Chinese Furniture (Wang Shixiang, 45), New York’s Metropolitan Museum of Art (Murk, Fong, 49), and Boston's Museum of Fine Arts as exhibited at “Beyond the Screen” (Berliner, 111). Other than these, there are no more than six unpublished sets, testifying to the rarity of the present lot from the Lu Ming Shi Collection.

Square corner cabinets are another classic type of Ming furniture. Their spacious interior makes them ideal for storage and sometimes display. Like other Ming furniture pieces, they come in three sizes. According to Wang Shixiang’s classification, the small cabinets, called kang cabinets, measure just over a metre while the medium-sized, about 2 metres tall, come without an upper chest. Cabinets without the upper component are generally called yifeng shu, or a case of traditional Chinese books, after their square form. Compound cabinets in four parts are usually large in size.

Another lot presented this season is a pair of late Ming square corner cabinets in huanghuali (102.3 W x 57.1 D x 198.1 H cm). It takes its form after yifeng shu, which is quite rare, and is designed with a central removable stile and a hidden compartment below the doors. The square form, flowing lines and simple design are all elements contributing to the enduring charm of Ming furniture. Made in the conventional way with floating panels, the cabinets have doors inset with solid panels that show the natural and beautiful grain of the wood. In the absence of decorations, copper fittings such as the cupronickel face plates, hinges and pulls in openwork in the present lot are complementary and counterbalancing in shape to the square form of the cabinets, demonstrating the superior aesthetic sense of Ming furniture makers.

The boom in the Ming furniture market is attributable to their interacting spiralling academic and market value. Ming furniture does have 16 merits and eight demerits as proposed by the expert Wang Shixiang, who believed that originality informed by the tradition rather than gaudy vainglorious innovation is essential for achieving elegance in any piece of Ming furniture. The two sets in the Lu Ming Shi Collection are works of exacting precision from the 16th and 17th centuries when Chinese furniture was at the peak of its development in history. A continuation in style from the Song and Yuan dynasties, Ming furniture is well noted for its impeccable joinery. The high prices fetched by such classic furniture have given rise to forgeries with modern replacements that are so finely made from precious timber and so cleverly antiquated that they can hardly be detected, observes Wang, who further adds that authentication requires a thorough understanding of how forgeries are produced. This advice was heeded by Wu Bruce, the expert’s mentee. Ever since her novice days, the passionate lover of Ming furniture delved beneath attractive appearances to gain an understanding of the tenon-and-mortise joints through up-close examination, textual research and carpentry. It is these studious efforts that Wu Bruce has accomplished what she has and has gained for her collection a reputation.

Under Wu Bruce’s guidance and recommendation, Philippe De Backer formed an understanding of his own, pinpointing the importance of balance in Ming furniture. In his article Jiaju yu Ziran (Furniture and Nature), he elaborates on how the Chinese people extend their philosophical pursuit of balance to furniture making to produce, in some extreme cases, tables that form a yin-yang pair. He further offers an understanding of Ming furniture in relation to environmental changes in asserting that wood never hinders and always builds up harmony in nature in its special way. Indeed, Ming furniture has never hindered since ancient times. Instead, it complements and accentuates just any environment.

In the Song painting Figures (Plate 4), the Chinese identification with nature is pronounced not only by the screen that is mounted with a painting of waterfowls on a reedy shore but also by the sparse and tasteful arrangement of the couch, tables and so on. In his copy of Song painting, Qiu Ying of the Ming dynasty was careful in preserving the simple elegance, bespeaking preferences for simplicity among the literati at the time. Apparently, the erasure of ornateness in Ming furniture is more likely to be a conscious choice for attaining a naturalness that dovetails with the philosophical ideal of man and heaven as one. In contrast, the Qing painting Hongli Appreciating Antiques (Plate 5) that is similar in theme and composition, except for a lower vantage point, is a celebration of opulence. From these examples, it can be seen that furniture can provide an appropriate backdrop to a painting, whatever the intended mood and ambience.

Seven Rooms and One Room

While De Backer has come to understand how well Ming furniture blends in with the environment, it is his collecting consultant Wu Grace who has really put theory into practice. She has been most successful in expanding the refreshingly new role of Ming furniture in modern décors. As proven at China Guardian’s show “Seven Room” held at Beijing’s 798 Art Zone in September 2014, an incense stand can stand in style in an entrance hall, a round-corner cabinet in a western kitchen, and a narrow rectangular table together with official hat’s armchairs in a modern study. It is perfectly feasible for the modern man to relish in the beauty of Ming furniture in the modern space and setting just in the same way that scholar-official of time past did with their furniture and nature.

Practically immune to the ravages of the past centuries, the set of rose chairs and the pair of square corner cabinets that will go under the hammer at China Guardian (Hong Kong) Spring Auctions are equally capable of radiating charm, this time as a group laid out in a conference room. The show, called “A Roomful”, is the realization of a concept that was not tried out in our previous seven-roomful show. It is hoped that visitors will find it a pleasant surprise and that collectors will be delighted with the sampled possibilities of having Ming furniture at home or at work.

Between the two shows, there are altogether eight schemes showing how Ming furniture can serve a variety of functions to suit different settings and concepts without compromising its stylishness. To draw an analogy, Ming furniture is no less captivating than Mount Lu that has impressed the Song poet Su Shi with vistas that vary with the perspective. Once we have extricated ourselves from the period in which the furniture was produced, it will dawn on us how timeless the pieces can be and how endearingly refreshing they are in a modern setting.

If furniture making is a tenon-and-mortise art, furniture mixing and matching is arguably a conceptual and spatial tenon-and-mortise art. Requiring both furniture and space to complete, this is an art that wondrously proves that Ming furniture can defy time and achieve timelessness. To quote a justified and insightful remark by Wang, much more than a work of craft as it is generally perceived, furniture is a work of art. It is only the exquisite works of art from the Lu Ming Shi Collection that can shine in whatever setting.